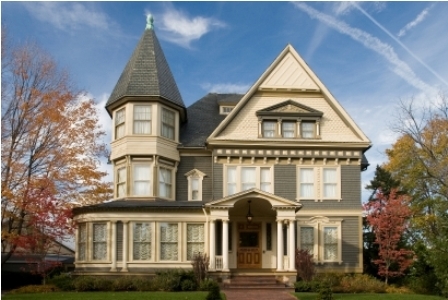 They’re big, they’re beautiful;  they’re Victorian.  No matter what town you live in, chances are good you’ve driven past a Victorian style home.  In every small town, there at least a few, likely built at the turn of the century by your city’s founder, doctor, banker or railroad magnate.

Simply put, they are the more ornate, detailed version of a classic, two-story, stick-style farmhouse.  They were built with the purpose of reflecting the rich and vibrant spirit of late nineteenth century America, though the name originated with Queen Victoria of England, who reigned during 1837 to 1901.

At this exciting time in history, the foundations for 20th century technology were laid with great leaps taking place in the fields of physics, mathematics and electricity.  It was an era of discovery and opportunity!  The move west throughout the United States was taking place, with new cities being founded and millions of immigrants arriving in droves from Europe.  The introduction of railroads made it possible for all of the latest inventions, and people, to make the trip west.

There are three categories within the Victorian architectural style:

Stick-style is defined by over-the-top structural elements, providing a chalet feel, including decorative trusses or scroll sawn gingerbread within gables.  With an emphasis on craftsmanship, these homes have bold outlines and plenty of personality.

Queen Anne is recognized most quickly by a round, one or two-story turret on one side, sunburst medallions in the roof peaks and scalloped shingles.  This style is the most ornate of the three Victorian styles.

Richardsonian is the masculine brother to Stick-style and Queen Anne.  The floor plans are massive, with large, heavy paneled, double door front entry systems and round top Romanesque arches at the windows and doorways.  The quickest way to recognize a Richardsonian home is to look at the exterior material selection; they are very often made of big, rugged blocks of stone.

Can you categorize correctly the Victorian home image included in this post?